The LIfe Of Riley 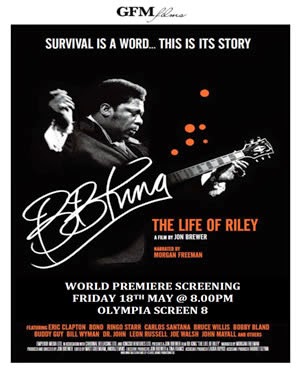 Here is a gigantic upload with the latest documentary about B.B. King's life. Enjoy it!

Review:
BB KING: The LIFE OF RILEY narrated by Morgan Freeman and joined by Bono, Bill Cosby, Eric Clapton, Bill Cosby, Dr. John, Bruce Willis and 20+ other heavyweight contributors including appearances by Keith Richards, Mick Jagger and President Obama. BB King opens his heart and tells the story of how an oppressed and orphaned young man came to influence and earn the unmitigated praise of the music industry and its following, to carry the title: 'KING OF THE BLUES'. Filmed on location all over America as well as in the United Kingdom, this picture brings to life the heat and gin-soaked plantations where it all began. With the full cooperation of the BB King Museum, owners of vaults and archives so precious and immense, that several trips had to be made to America to revisit the collection and partake of its many gems. Prejudice and segregation has stained the lives of countless black person and BB 'Riley' King made sure that through his music, he never allowed it to mar his spirit. This is the essence of the story that makes an astoundingly beautiful film; extremely informative and visually captivating.


Password and Links:
mississippimoan
7.5 GB uncompressed files
http://ul.to/m9c1clff
Posted by Dirty No Gooder at 7:42 AM